Fueling the Farm-To-Table Movement, with Lessons from Toyota

From the Boston Globe 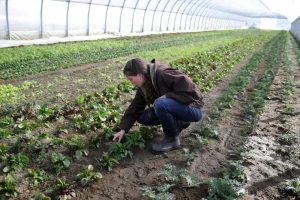 Sarah Voiland weeds at Red Fire Farm, which she runs with her husband. They are employing lean farming techniques that help farmers expand efficiently.

On a quiet February afternoon, Ryan Voiland wandered through the mid-winter muck on his farm, pushed open the door to his barn, and found himself awash in a bounty of lettuce. All around him, farmhands scooped and sprayed leafy greens just plucked from his greenhouses, before drying and stuffing them into plastic baggies.

The scene was anything but efficient. The washing bins were too far apart, the farmhands forced to walk the produce from one bin to the next, switching out washing bins as they went.

But for Voiland, there was opportunity in the chaos.

He set out to answer one critical question: “How can we set up the area to be as efficient as possible?”

Since he first began selling produce from his family’s garden in a roadside stand at age 12, Voiland has strived to make a living growing organic food. He’s spent the last 27 years poring over books and trade magazines to build his Red Fire Farm into a 200-acre operation that employs more than 60 people in Granby and Montague. But those small farm principles were also preventing him from growing.
After decades of intentionally operating outside of the industrialized food system, independent organic farmers such as Voiland are being squeezed by large corporate growers that have jumped into the market, putting pressure on prices. And that’s led a crop of small growers to begin adopting efficiency principles from an unlikely source: Toyota factories.

Dubbed “lean farming,” these techniques seek to increase production while removing muda, the excess waste, effort, and overproduction that breed inefficiencies. Farmers hope it will help them cut costs, while letting them compete in an increasingly crowded market.

That starts with trimming the time it takes to get from field to farmstand.

“If the turnaround takes a long time, then we’re not making money. You want to be in here like a NASCAR pit crew,” said Scott Morrison, a consultant who has begun working to train farmers in lean principles.

The concept of lean manufacturing was first introduced to America in the ’70s, after a team of MIT scientists was dispatched to Japan to sort out why US automakers were losing market share to foreign imports. MIT had a stake in the industry — its business school’s founder, Alfred P. Sloan, had run General Motors during four decades of remarkable growth. And so they went in asking, “How come the home team can’t play this game anymore?” Jim Womack, who led the group, recalled.

The researchers quickly learned that Toyota’s factories were constantly striving to reach peak efficiency. Every step in the manufacturing cycle had been measured and ergonomically designed so workers would expend as little effort as possible. And the Toyota employees, many of whom were former rice farmers, were given a degree of latitude within the factory to help identify inefficiencies whenever possible.

Womack brought these lean manufacturing ideas back to the United States and in 1990 coauthored a book, “The Machine that Changed the World.” Since then, he’s led the Lean Enterprise Institute in Cambridge, helping to streamline industries like health care and law enforcement. But he’d never looked at agriculture.

“From our standpoint, it wasn’t very interesting,” he said, bemoaning the homogeneity involved in processing endless rows of corn or wheat. And the disorganization that plagues a typical barn gave him hives. “If you’ve been on farms, one of the things that really strikes you is that farms are just a complete, utter mess.”

But that changed when he received a copy of the book “The Lean Farm” in the mail last spring. It was written by Ben Hartman, a farmer in Goshen, Ind., who had applied Womack’s research to his 7-acre vegetable farm, winnowing his workload such that he is now able to sustain his entire operation by farming just a half-acre of land.

Scott Morrison, a “lean consultant” who has begun to focus on farms, paid a visit to Red Fire Farm and asked its operators to walk him through the production cycle to help them make improvements.

Today, Hartman serves seven or eight high-end restaurants, between 40 to 50 community-supported agriculture, or CSA, programs, and one farmer’s market. He works with his customers to determine exactly what they want and grows nothing more than what they ask for. In the peak summer months, when large farms’ crop yields are highest, pushing prices down, he differentiates himself by catering to chefs and planting hard-to-find vegetables.

Hartman has begun giving lectures on his techniques and is developing a following among small farmers. “The reality in US agriculture is that we’re addicted to producing a few commodity crops,” Hartman said. Instead, he tells growers to “find a niche and focus.”

“The thing about lean is that the principles are universal, so they can apply to any size and type of farm,” Hartman said. And those farms seem to be responding: In the year-and-a-half since it was published, the book has gone into its third printing. Hartman is now writing a follow-up.

Ryan Voiland of Red Fire Farm had read Hartman’s book and began researching lean techniques after last year’s harvest, the worst on record since he first started farming. “It was like a double whammy with the terrible drought in 2016 plus increasing wage rates,” he said.

Through a grant program funded by the Mass Growth Capital Corporation — one of several initiatives now working to connect New England growers with productivity specialists — Voiland hired Morrison, the consultant who has begun to focus on farms.

In late February, Morrison paid a visit to Red Fire and asked the team to walk him through its entire farming production cycle, using Post-it notes to break down every step. Each time they saw an opportunity for improvement — or a Kaizen Burst in lean parlance — he slapped a bright red Post-it on the wall. They told him about the daily scramble to get to farmers’ markets because the tables and signage were scattered throughout the barn. Morrison suggested the simple idea of stashing the items together.

“If you have to spend time looking for it, it’s wasted motion,” he said.

In all, they identified 17 bursts in just an hour.

“A lot of farmers are feeling the squeeze,” Morrison said. “There’s a lot of competition, and they’re saying, ‘I’m not making a lot of money from farmers markets anymore, and my CSAs aren’t growing as much as they used to.’ And the reason for that is there’s now five CSAs you can choose from. The market is saturated.”

The all-too-common circumstance, says Daniel Keeney, business adviser for the Center for an Agricultural Economy in Hardwick, Vt., is farmers “working in their business, not on it.” Most farmers undervalue their own work, working 18-hour days and paying themselves as little as $3.50 an hour, he said. And after subscribing to an ethos of working harder, rather than smarter, many experience burnout.

Keeney typically helps small farms to secure grants or bring in consultants to help balance their books. But in early March, Keeney hosted Hartman, “The Lean Farm” author, for a series of discussions with local growers about production efficiency. He said he grew interested in lean principles after reading Hartman’s book and began interviewing veteran farmers about the lessons they’ve gleaned about streamlining production.

He tiptoes around the phrasing, opting not to rely on the “lean” moniker so as not to evoke images of big business. “We don’t want to turn people off in a visceral way, who might say, ‘That’s not for me, that’s not the farming that I do,’ ” Keeney said.

But he says the message is resonating.

“All the case study farmers were sort of jealous,” he said, telling him, “ ‘I wish I had someone to sort of talk me through these aspects of the farm business five or 10 years ago.’ ”

■ Put every tool in its place: Better organization saves time.

■ Farm for your customers: Only grow what they’ll buy.

■ Cut production waste: Minimize manual labor and movement, reduce produce packaging, and use equipment that can do more than one thing.

■ Reduce management waste: Replace low-profit crops with high-profit ones, don’t overbuy supplies, and spread the workload and sales throughout the year.

■ Simplify farmers market sales: Don’t bring too much produce and replace weighed items with ‘buy by the bag’ or ‘grab and go’ options.