From ProSales. By Scott Morrison. 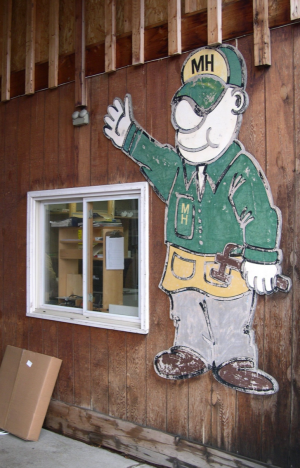 While part 1 of this series discussed the seemingly contradictory notion behind making Lean principles stick, part 2 explored how Curtis Lumber in New York State was able to implement those ideas to improve its performance. This part of the series looks at another Lean case study.

Lean’s mantra is “continuous improvement,” but it’s not enough! Many times, the inertia of inactivity can be shaken only by something so new and different that it forces you to make a major change, followed by another change. Think of it as plate tectonics: There are the frequent rumbles along a fault line, and then every few hundred years comes The Big One.

Mathew Hall Lumber’s Distribution Center in St. Joseph, Minn., was built in 1978, and in 2014 it was laid out almost exactly the same as opening day. Loran Hall, president/CEO and fourth-generation co-owner with brothers John and Dan, wanted to improve operations. This is another yard optimization project, but the Halls took a different path.

The breakthrough didn’t come in the initial change. In that round, we moved framing and pressure-treated stock, re-organized picking and staging routes, and reduced the stock/staging zone by 50%.

Thoughts of paving the stock area were entertained, but the owners decided instead to add gravel and re-grade the surfaces. Considering virtually nothing had been done to improve the layout for 35-plus years, it was big, but traffic patterns had not significantly changed.

The First Wave
Then co-owner Dan Hall and yard supervisor Neil Schneider went further. All stock locations were moved again to a reorganized pair of sheds on pavement. The gravel area is now used only for staged loads, cutting 50% of space utilized and avoiding paving over any gravel. The result: An original 100,000 square feet dedicated to stock storage is now down to 22,500 square feet (that’s almost 80%), with no reduction in the number of SKUs.

“It all started with knowing we had to change,” Loran Hall says. “First I hired Casey Mason to get us collecting operations data to look into our processes. Then I had to fight for a year with the management team to accept culture change.

“The pushback from them was that the change wouldn’t work because ‘we do it a certain way.’ Then a couple of the managers who were so overwhelmed and unprepared for change bought into it … and from that point 5S/Lean worked. We made it through, but we had to quit doing it the way we always did it. We’re taking the grill out tomorrow to thank everyone.”

Loran, Dan, and John Hall put in place the attitude, invested in education/training, and set aside time for managers to roll out 5S/Lean. “Lean is about getting the buy-in from the employee,” truss plant General Manager Calvin Fischer says. “The only way to do that is to encourage and recognize them when they have a good idea. The first idea may not be the final idea, but it is the start to improving flow within the facility.

Let ’em Run
“You cannot force an idea on a person,” Fischer adds. “The best thing to do is give them some things to try and let them run with it. You will be amazed with what they come up with. If you force it on them, they will shut down and your chances of success will dwindle.”

For example: In Mathew Hall’s truss plant, there’s a rope to open a garage door on the left side of the path where employees push their carts. “Most people are right-handed, so every time we had to open the door we would have to stop the cart full of lumber, and then go and pull on the string, come back to the car and push it out,” Fischer says. “One of the sawyers, Dalen Kittelson, came up to me and asked, ‘Why don’t we have a pull rope on the right side as well?’ So, we added a rope. Now, no matter if you are right-handed or left-handed, you do not have to stop … you never have any down time in the process of pushing a cart.”